A review of United's B787 Polaris Business class using Continental's 2-2-2 seating from LAX to Tokyo!

This is from a trip that occurred May 2017. Any airline, lounge, and/or loyalty program policies may have changed since then. I have not been paid by any entity to write or produce this piece.

A year prior to this trip (Summer of 2016), my father and I were scheduled to fly United Airlines from Tokyo Narita (NRT) to Houston (IAH). We had waitlisted for a United BusinessFirst upgrade with miles and copay, which is the only way you can score an international upgrade to Business Class from cattle class, er, Economy. The only way you can get around this is if you find yourself with some Global Premier Upgrade certificates, which are only awarded United MileagePlus Premier 1K and Global Services. With less than 24 hours left until departure, and all but 2 seats taken in BusinessFirst, and our names way down on the list, we decided to cancel our nonstop to Houston and forked over 80,000 MileagePlus miles each for a grand whopping total of 160,000 miles to fly United’s soon-to-be-extinct Global First product from Narita to Washington-Dulles (IAD).

Fast forward one year later, I find myself in quite a dilemma. That flight from Tokyo to Houston that was not used is just sitting there, collecting dust with money attached, about to expire. I had the intention of going to Europe for some summer downtime, but now with this new development, I was unwilling to let this unearned money go into United’s books without a fight. So, as any rational avgeek would do, I booked a cheap one way flight to Tokyo Narita from Los Angeles (LAX), just to use up the remainder of the ticket. I then paid the change fee to get on the same day turnaround flight from Tokyo back to LAX on the same plane I arrived into Tokyo on. This would put me into LAX with plenty of time before my flight from LAX to London Heathrow (LHR) would take off!

The following will cover LAX to Tokyo in United’s half-new Polaris Cabin (soft-product is only half the battle!). 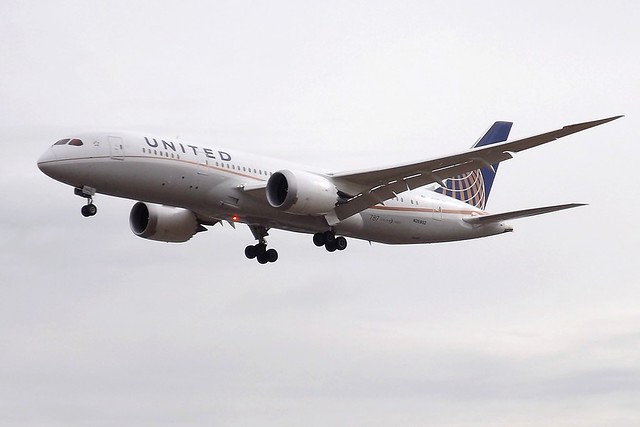 After a very delayed landing in LAX from Houston, I was a bundle of nerves as we had landed promptly at the time UA32 was supposed to start boarding. To make matters “more exciting,” the plane had to take the longest route to United’s Terminal 7 due to the construction at LAX. Needless to say, I felt us taxiing for an eternity. By the time we pulled into the gate, it was 20 minutes past the official departure time of UA32. Missing this one flight would completely derail my complex travel plans. Lucky for me and other Narita-bound pax, United kept UA32 open for us. To take it a step further, we arrived at the gate directly across from UA32.

After boarding, I settled into my seat for the next 11.5 hours: 6B. This is the bulkhead row for the “mini” cabin, and I chose it for the extra space you’ll find in the footwell. As one of the very last to board the flight, the flight attendants welcomed me, handed me my amenity kit, took my dinner and pre-arrival order, then proceeded to bring a predeparture drink of sparkling wine and the signature Polaris truffles. After the last delayed passenger from our Houston flight was onboard, the door was closed and we were soon on our way to Tokyo!

Soon after takeoff, the flight attendants got everything ready for the meal service, and I immediately asked for the wine flight. For those of you that don’t know, United offers wine tasting flights in Polaris Business in the afternoons, while in the morning/midday they offer mimosas and Bloody Mary service. These are supposed to be “signature” attributes for Polaris flights, but the drinks aren’t exclusive at those given times (in my experience). Just remember to ask for the service, as United continues to cut back on Polaris service, and therefore don’t straight out tell passengers of the available amenities.

Soon came the appetizer and salad. Now, I unfortunately didn’t take pictures of the menu, but I promise to do so in the future! One complaint I have for United is the lack of salad dressing. I understand people enjoy the olive oil – vinegar mix as salad dressing, but when it was Continental’s BusinessFirst product, they would have a choice of a vinaigrette and a cream based or regional dressing, such as ranch, or sesame dressing on flights to Asia. Not only that, but the salad plates were much bigger, and they were served after the appetizers, and both were customizable, served seat-side through a cart service. Since I use the olive oil and vinegar as a bread dip, so I tend to eat the salad dry. What do you think? Should dressings be brought back to United’s premium cabin?

After finishing my undressed salad, I moved on to the dinner portion, which consisted of a delicious beef entree with steamed rice and vegetables. The meat was soft, tender, and juicy, melting in your mouth with every bite. I will say that the catering in Los Angeles seems better to me than the catering provided in San Francisco, but that’s my opinion. What I wish United would start doing (I have many wishes) is getting rid of those trays when bringing the courses. This is not a Burger King or KFC, so let’s move on from trays please?

Passing on the signature Polaris sundae, I opted to go with the small desserts, which included an apple tart and another small dessert I don’t remember fondly. Soon after the meal service was over, the customary water bottles were passed out, and I got ready to rest on this transpacific voyage.

Prior to departing LAX, I requested several Polaris “signature” amenities, such as the cool gel pillow and the mattress pad. To get the full “Polaris experience,” I recommend requesting these amenities as soon as you board, as United only loads a limited amount of each item, not enough for the entire Polaris business class cabin. These items may take up space, especially in the 2-2-2 configuration, but they definitely help elevate the experience of flying Polaris.

After sleeping for about three hours, we were only half-way to our destination. I decided to try out the hot anytime snack, which turned out to be Korean-style braised beef with rice.

The small snack was actually pretty good, and after washing it down with some ginger ale, I headed back to sleep for just about the rest of the flight. If the flight attendant wouldn’t have woken me for the pre-arrival meal service, I could’ve gone a for a couple more hours of zzz’s!

I got the omelette for the pre-arrival meal service, and was actually taken aback by how salty it was. Don’t get me wrong, I’ve had this omelette plenty of times on a variety of routes, and they’re usually salty to compensate for our lack of taste in the air, but this one was extremely salty. So I ended up skipping the omelette and ate the veggies, along with the fruit, breads, and yogurt, topped off with a cup o’joe.

After arrival into Narita, I went through customs and immigration, and was then on my way to the nearest store with an iPhone charger (left mine at home, oops). Afterwards, I headed over to the United Club to freshen up, then headed over to the gate to board the same plane to take me back to the same place. I didn’t take any pictures of the United Club due to my lack of time, but if you’d like to see more about the lounge, this link will take you to the LoungeBuddy page that has pics, info, and reviews regarding the lounge.

Stay tuned, as I’ll be publishing the continuation of this trip in a separate post.

Thanks for reading my first post! Hope you enjoyed it, and if you didn’t, then please let me know what I can improve on in the future!

Want to help us bring you more content? Donate to our blog via PayPal! Every dollar and dime helps us continue flying, which allows us to provide this awesome content to you! Just donate to bloxfilm1@gmail.com, on PayPal, and you’re good to go!

Thank you for being here, and for helping us bring you this content.

© BloxfilmOne Travel 2020. Unauthorized use and/or duplication of any and all material, including text and pictures, without expressed and written permission from this site’s author and/or owner is strictly prohibited. Excerpts and links may be used, provided that full and clear credit is given to BloxfilmOne with appropriate and specific direction to the original content.